Golf was first played at Worlington in 1890 when the owner of the land, Mr William Gardner, invited two friends - Col E W D Baird, a local landowner, and Alexander Mackenzie Ross, a famous Scottish amateur golfer, to lay out a couple of holes for their amusement.  The land which used to be a rabbit warren was of excellent quality, being underlain by chalk and sandy soil with firm turf and short grass.

The famous Scottish professional, Tom Dunn, was approached and asked to mark out a course of 18 holes.  The Club was formally founded on 18 May 1893 with twenty members joining on that date, most of whom were from the Newmarket area or who had horseracing interests.  Initially nine holes were opened for play and it was soon realised that the other nine, which were located on peaty soil, would never be as good.  Worlington has remained a 9-hole course ever since.

In 1895, the Prince of Wales (who became Edward VII in 1901) agreed to be the Club’s President and Her Majesty Queen Victoria acceded to the Club’s request to be called Royal Worlington and Newmarket Golf Club.

The nine holes at Worlington were recognised for their quality right from the start.  An early report in 1895 noted that ‘none of the holes afford tame golf, and several of them are of a very sporting character’ and that ‘the greens are simply magnificent and would compare favourably with those of many seaside links’. Exhibition matches were played involving famous professionals, including J H Taylor, Willie Park Jr, Hugh Kirkaldy and Jack White (the Club’s professional at the time), all Open Champions in that era.

The only material changes that have been made to the course were in the early 1920s following a visit by Harry Colt.  Based on his advice, the 8th hole was lengthened and a new 9th hole created.  Apart from some modest lengthening to deal with technological advances, this is the course that remains to this day.

Following the playing of a match between the Club and the Oxford and Cambridge Golfing Society in 1928, Bernard Darwin wrote his weekly article for Country Life titling it ‘The Sacred Nine of Worlington’ in which he wrote, ‘Which is the best inland course? I am going to write down “Worlington” without the least hesitation’.  Darwin’s heartfelt sobriquet stuck, and it has become widely recognised as the best 9-hole course in the world ever since.

Cambridge University Golf Club was founded in 1869, putting it amongst the six oldest clubs in England. At the time that Worlington was formed, CUGC played its golf on Coldham Common in Cambridge, a flat featureless muddy course of which Darwin wrote, ‘I am quite sure that it was the worst course I have ever seen, and many others would probably award it a like distinction’.  To add to its problems the course sat amidst a rifle range and a railway line was driven through it in 1895.

On deciding that this was no longer acceptable, the undergraduate golfers looked for alternatives and alighted upon Worlington.  In 1901, an arrangement was put in place allowing CUGC to play at Worlington, or as they called it colloquially, Mildenhall, because this was the nearest railway station. It is said that in the early days the students would drop their clubs out of the carriage windows as the train passed the course and then walk back down the line from Mildenhall to collect them before climbing over the fence to the course near the fifth hole.  This practice continued unril 1922 when a halt was built at Worlington.

The agreement between the Club and CUGC has remained in place ever since.  This was reinforced by the formation of the Oxford & Cambridge Golfing Society, made up of ex-blues from both universities.  The Society and CUGC have been playing matches at Worlington since 1901 and the Society has had an annual match with the Club since 1922.  Over the decades, the bond with CUGC has been strengthened by many ex-blues becoming respected members of the Club.

In praise of The Sacred Nine

Perhaps three of the greatest writers on golf have been associated with the Club – Bernard Darwin, Henry Longhurst and Herbert Warren Wind.  Darwin first visited Worlington in 1895 and retained a close affinity with the place throughout his life.  It was he who provided the epithet, the Sacred Nine.  Longhurst was in the Cambridge team from 1928-31 and then a stalwart member of the Society playing regularly in the annual fixture thereafter.  He put Worlington ‘on a par with the Old Course at St Andrews, each in a class by itself with no other comparable entrants’.  Wind, the great American writer, who famously coined the phrase ‘Amen Corner’ at Augusta National, said of Worlington that it was ‘far and away the best nine-hole course in the world, and it also held that position in the distant days before the First World War, when the nine-hole course was in flower’.

Others have also sung the course’s praises.  JSF Morrison, the course design partner of Harry Colt, suggested that the 5th hole is nearly the best short hole in the world, ‘only the perfectly struck shot has any hope of leaving the ball on the green; the 90 per cent good shot which is usually good enough to get a three at the majority of short holes, is no good at all at the 5th at Mildenhall’.  Patric Dickinson, the distinguished poet and ex-blue, wrote of the 2nd hole that ‘it is like pitching onto a policeman’s helmet’.  Donald Steel mused that if in the remainder of his golfing lifetime he was restricted to play just one (inland) course then his ‘ideal inland retreat would, without a doubt, be Royal Worlington and Newmarket’.  The contemporary golf architect, Tom Doak, gave the course a score of 9 on his 10-point scale, characterising it as ‘an outstanding course – certainly one for the best in the world – with no weaknesses in regard to condition, length or poor holes.  You should see this course sometime in your life.’

Michael B Morrison, The Origins of the Sacred Nine, Royal Worlington and Newmarket Golf Club, commemorating the 125th anniversary of the Club, published 2018

Both books can be purchased by contacting the Secretary of the Club. 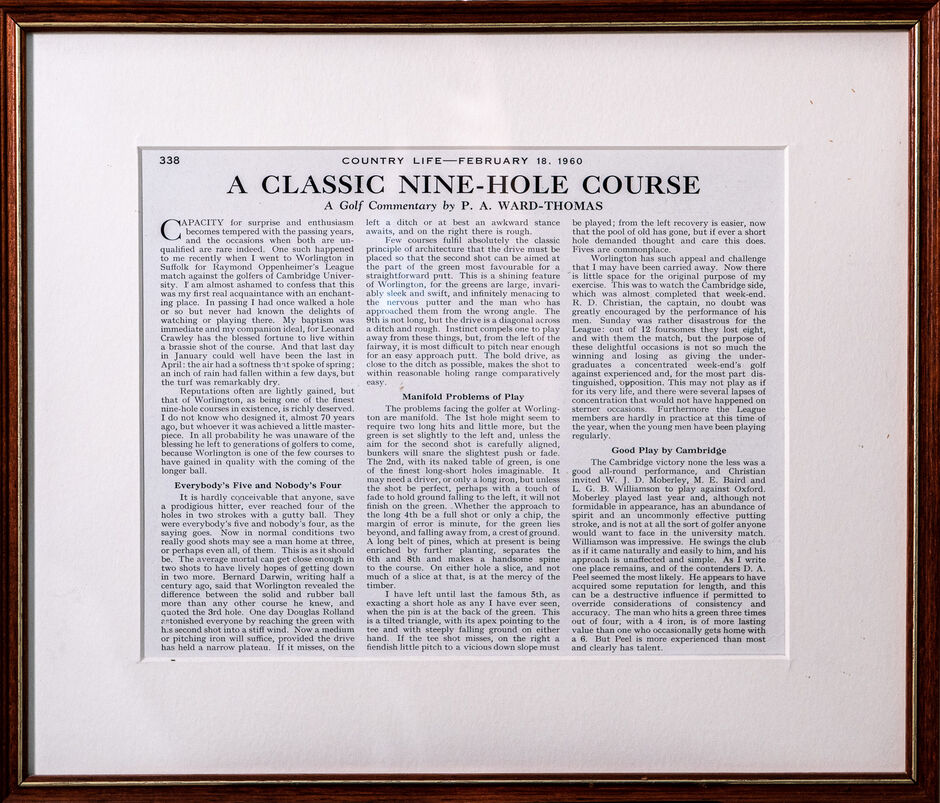 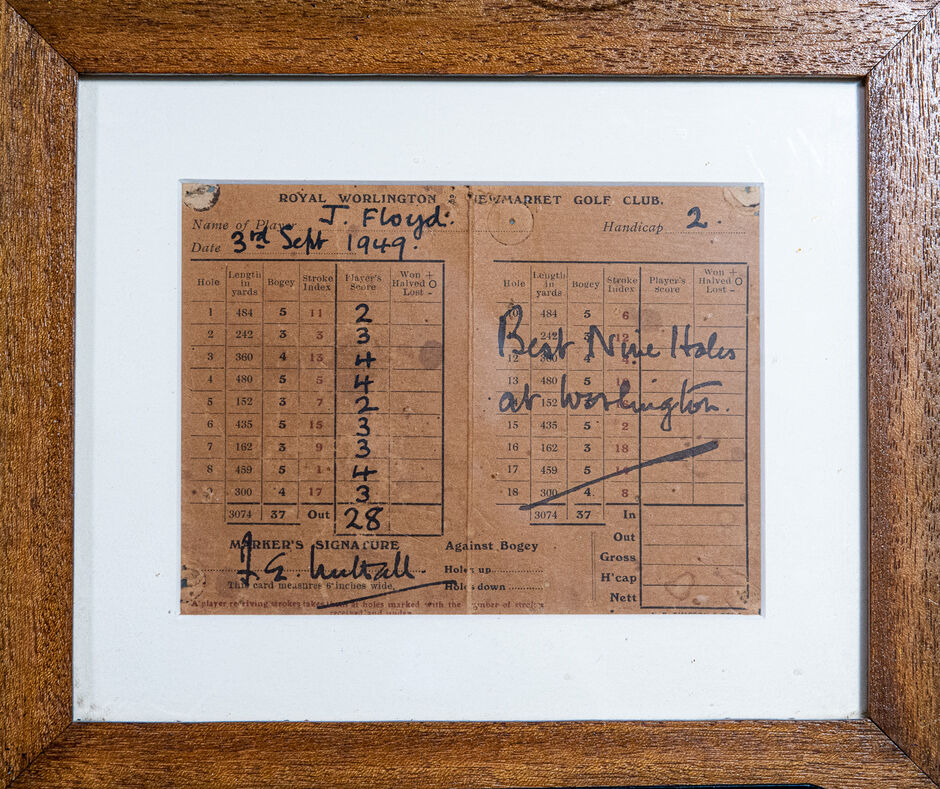 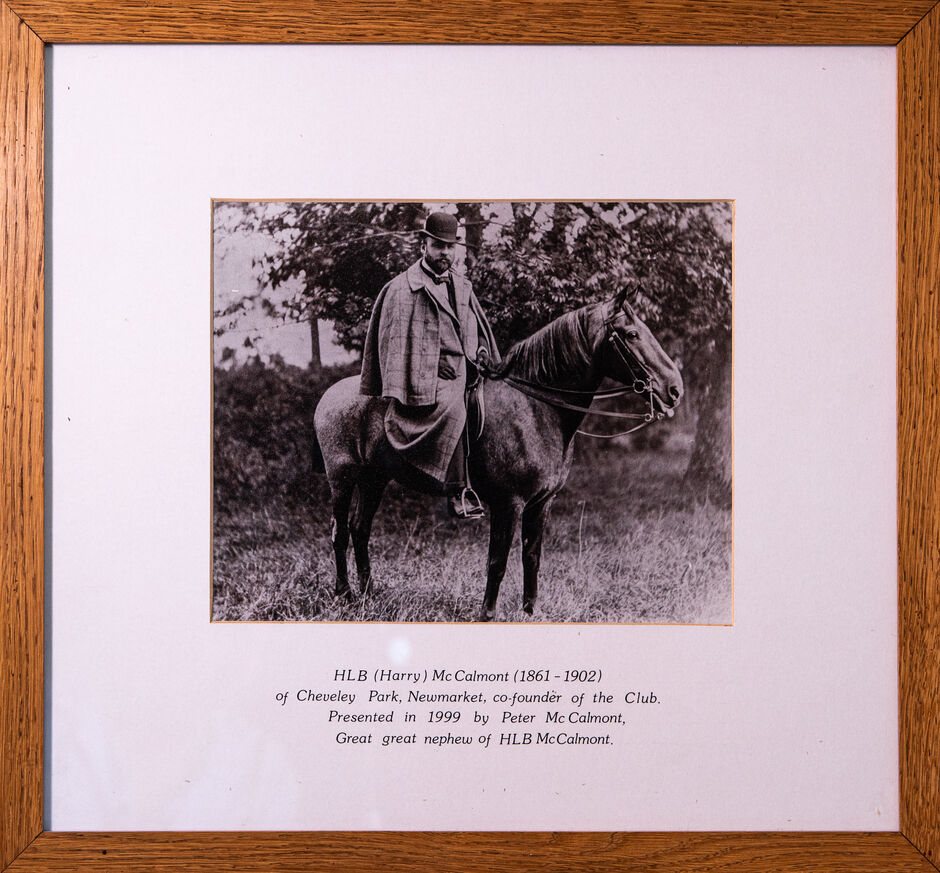